View source
watch 02:07
Spider-Man: No Way Home Trailer Dropped - The Loop
Do you like this video?
Play Sound

Abigail Cowen
Bloom Peters is the main protagonist and central character of Fate: The Winx Saga. She is portrayed by Abigail Cowen.

She is a 16-year-old fire fairy[1][2] from the First World (Earth) who arrives in the Otherworld to enroll at Alfea to learn to master her magical powers.[1][3] She is also the love interest of Sky

Bloom was born on December 10, 2004, to unknown parents. When she was a baby, she was stolen by witches and taken to Aster Dell. Rosalind eventually destroyed Aster Dell and saved Bloom, sending her to the First World (Earth), Gardenia, California, USA, to be raised by the couple Mike and Vanessa Peters. Bloom took the place of the unnamed biological daughter of the Peters family who died shortly after birth, unbeknownst to all of them.

The season begins with Bloom walking into Alfea, she is new and waiting for Stella to show her around. She eventually gets impatient and starts walking where she meets Sky who notices her and decides to help her find her way. She and Sky have a conversation and establish that she is a fairy and he is a specialist, she goes on to tell Sky that from where she comes from there are no fairies, since she is from California and not the Otherworld (the land of the mystical beings). Three months ago, Bloom had no idea the Otherworld existed. Bloom meets up with Stella and tells her that she went through a portal in the middle of nowhere. Bloom meets with Headmistress Dowling where they discuss what she will be learning in the upcoming weeks and how she will slowly learn control. Bloom is frustrated that things will be slow, wanting to learn control quickly, but Alfea's curriculum is designed for future rulers, army leaders, scholars, and discoverers of lost magics. Dowling reminds her that there is "no other choice" for her to learn what she needs to know, "trust the process."

Bloom is in her room, where she is talking with her parents about her school, and how everyone seems nice but its five girls (Stella, Musa, Terra, Aisha and Bloom) in an enclosed space and goes to say "it's only a matter of time before we descend into a Lord of the Flies situation". Her parents go on to criticize how unsocial she is and how they want her to make friends. Bloom's parents believe she is at an International Boarding School in Switzerland. Aisha, Bloom new roommate, introduces herself after saving Bloom from an awkward question from her parents. Aisha is curious about the lies she heard in the phone call, and Bloom explains that her parents are human beings and she is a fairy, Headmistress Dowling had explained to Bloom she had a distant dormant relative who was a fairy.

While she is getting ready for the Orientation Party, Stella displays magic control in front of Bloom. Asking Stella about her magic, it is explained that Fairy Magic is linked to emotion, positive or negative. The stronger the emotion, the stronger the magic.

Thinking about her interactions with her mother causes Bloom to become strongly emotional. In a series of flashbacks, it is revealed that she has a poor relationship with her mother, often arguing about Bloom's lack of interest in spending time outside her room, or with friends; instead going to antique shops, rummage sales, and spending time alone. One such argument ends with Bloom slamming the door, yelling at her mother. Another flashback shows Bloom's father suddenly removing the door to her bedroom, as she is seen putting together a lamp. Upset, Bloom tries to appeal to her father, but her mother is angry that Bloom slammed the door, and her father agrees that Bloom needs to be more open with them. Taking away her door seems extreme to Bloom, but knowing that arguing with her mother will only make things worse, she stays quiet. That night, Bloom is unable to sleep, angry. A fire lights on the carpet in front of Bloom's bed, a slow moving line of fire leading out of her room, through the hallway, and into Bloom's parents room, lighting the bed on fire. Bloom's mother, Vanessa, ends up with third degree burns.

Avoiding the Orientation Party, Bloom leaves Alfea, going beyond the barrier, eventually finding a clearing in the forest to practice her magic in. Struggling with her magic, even after figuring out a trigger emotion, it becomes obvious she has little control, being unable to make the fire she creates go out. Aisha finds Bloom as she is losing control, throwing fire wildly at her feet. Bloom becomes angry that she is no longer alone, sending fire along the forest floor in Aisha's direction. Aisha defends herself with a wave of water, putting out Blooms flames.

The two return to the school, Bloom explaining to Aisha why she was in the forest, trying to figure out her magic, citing a terrible first experience with magic. Aisha doesn't think that justifies Bloom being in the dangerous forest alone, and responds that she also had a terrible experience with magic: because of a failed math test she had flooded her secondary school with the water from taps, sprinklers, and toilets, commenting "Have you ever waded through human poo? I have. Not pleasant. Sometimes being a fairy means you have to deal with shit."

After Bloom shares about the fire, Aisha finds it strange that Bloom could use such powerful magic, only having a distant relative as a fairy, and asks if Bloom could be adopted. Bloom denies this, having heard the story of her birth a million times, a miracle baby with a heart defect in the womb, but a day after her birth it was gone. Aisha determines Bloom must be a changeling, switched at birth, and a pure blooded fairy. Bloom storms off, after Aisha explains what a changeling is. In her room in the suite, she does research on changelings using her phone.

Confused and wanting to see her family, Bloom returns to Gardenia, with the help of the Gateway Ring that Stella lends to her. Knowing her parents think she is at school in Switzerland, she stays out-of-sight outside and calls them on the phone. Her parents tease her about having two calls in one day. On the verge of tears, Bloom reassures her parents that she is fine when they ask how she is. They mention that it is okay to not be okay, being sixteen and moving to the other side of the world takes bravery. She wonders if she made a mistake going to Alfea, to which her mother tells her she is "too special for somewhere like here, it's not who you are." She doubts that they really know her, but her father reassures her, "we are your parents" - "if we don't know you, nobody does."

Remembering the fire, Bloom decides she didn't make a mistake going to Alfea. Still concerned, her mother tells her that she can handle whatever she is going through, her path won't be like everyone else's, hard as that is, but she can't wait to see who Bloom will become.

Bloom returns to the Gateway location, which turns out to be where she stayed after the fire (scared to be at home, and hurt her parents again). In a small office space she had set up a bedroom of sorts, some of her things still in the room. Sitting on the bed, looking at her journal, Bloom hears something whisper her name. Looking through the blinds of the window above the bed, she sees a monstrous shadowy figure with a tail; she immediately hides, losing Stella's Gateway Ring as she falls onto the bed.

To escape the monster attacking her, Bloom climbs into a service space under some floor grates. When she sees Stella's ring, she tries to get to it, but it is on the other side of a vertical grate and she can't reach it before. The monster takes the ring. Breaking through a vent cover, she finds Dowling, who tells her to keep moving. Bloom runs through the Gateway into the forest where Terra, Musa, and Aisha are waiting. Bloom asks them about the monster, and Terra tells her she thinks it is a Burned One. The four return to their Suite, where Aisha tries to comfort Bloom, saying that Dowling will take care of the Burned One, her parents will be safe.

Before coming to the Otherworld, it’s implied that Bloom was bit of an introvert, due to her lack of interest in parties or socializing in general. Even going as far as saying that she, "doesn’t want to be a basic bitch" like her mother. The day she found out she was as a fairy was because of how strong her anger was towards her parents, hinting that she has bit of a temper. She is also very strong willed, loyal, fierce, curious, reckless and stubborn. Having little to no control over her powers made her confidence and self esteem in herself go down, but as the series goes on, she becomes more confident in herself and her powers.

Bloom has red hair, hazel eyes, and a pale, freckled complexion. She often wears her hair in either a high ponytail, a simple half-up half-down updo and down in loose waves. When using her powers, Bloom’s eyes glow orange.

Sky is Bloom's main love interest and by the end of season 1, they've kissed twice, but it is unknown if they are dating/an item.

When Bloom first came to Alfea in "To the Waters and the Wild", he is the first person she meets, and they take a liking to each other. After the first episode, Sky gets back together with his ex, Princess Stella. They grow close, but Bloom has a moment of distrust when she finds out that he had been spying on her for Silva.

Bloom is an adaptation of Bloom

. Her cartoon counterpart was found in a fire as a baby by the man who eventually became her adoptive father. In the live-action series, Bloom was secretly switched with a girl who died after she was born due to a heart defect. 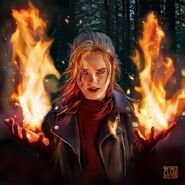 Fanart of Bloom showing off her powers

Português do Brasil
Community content is available under CC-BY-SA unless otherwise noted.
Advertisement