Theo Graham
Dane is one of the main characters of Fate: The Winx Saga. He is portrayed by Theo Graham.

Dane attends a party being thrown at Alfea and is offered alchohol by Riven, but he abstains. However, after Riven mocks him for it, he relents and takes a swig. After he watches Terra nearly strangle Riven with vines, she apologizes for the less than ideal introduction. He responds that her introduction can’t be worse than throwing up after a single drink, and after she realizes what he means, she leads him away to vomit. Later, he likes one of Riven’s photos on social media.

Dane sits down to help Terra make Zanbaq, but he leaves without doing anything after Riven makes fun of him for it via text. Dane helps Terra carry Saul Silva into the Alfea greenhouse after his headmaster gets an infection from a Burned One.

Dane is someone who just wants to do what he thinks is right, even if that involved doing what others think is wrong. He desperately wants to be liked by Riven, to the point where he goes along with Riven making fun of Dane's friend Terra.

Skilled Combatant: Due to his Specialist lifestyle, Dane is akin to multiple combat styles and executes them during his training.

Sword Proficiency: Like all Specialist's, Dane is well versed in utilising swords and blades in battle. 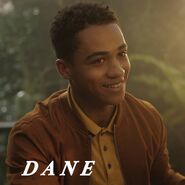