View source
watch 02:56
Doctor Strange in The Multiverse o Madness - The Loop
Do you like this video?
Play Sound
Our community needs more information on this page! Can you help out? Click here to add more.

Fairies are magical beings that primarily reside in the Otherworld.

The students at Alfea, the only fairies seen thus far, and there is no overall appearance similarities other than the fact that their eyes change color. Fairies with the same 'element' or the type of fairy that they are determines the color their eyes change into when using their abilities. Fairies are first seen at Alfea where they attend school. Many students seem to be fairies and they learn magic in classes designed to teach them control. According to Farah Dowling, no fairy has been able to transform into their magic forms in over a hundred years, until Bloom acquired the transformation process herself. While the clothes seemingly do not change, the wings took on the form of Bloom's element (fire), which could point out to the nature of the transformative appearance is given the respective magic of a fairy.

In the magical world, there are 6 types of magic 'elements'. These are Light, Water, Fire, Mind, Earth and Air. Each fairy is born with one of these elements, but their abilities can manifest themselves in different ways. Fairy magic exists in the very fabric of Nature. Channeling is a way fairies are able to amplify their magic from external sources such as The Stone Circle, however emotions can also be used to amplify powers. During the evolution, Fairies lost access to Transformation Magic which grants a fairy elemental wings. Also, fairies are able to combine their magic with other fairies for various effects. A fairies powerset is unique to them regardless of their elemental alignment. For example, Musa's abilities focus on empathy control whereas Farah's abilities are rooted in typical abilities associated with the mind such as telekinesis.

Mind fairies posesses multiple mind based powers such as:

Eye Color: Violet-Purple for Musa; White for Dowling and Rosalind

Light fairies possess multiple light based abilities such as:

Water fairies possess an array water based abilities such as:

Earth fairies possess an array of earth based abilities such as:

Air fairies possess an array weather based abilities such as:

Fire fairies posses an array of fire based abilities

Fairies must attend school to completely learn to cope with their abilities. Most fairies attend Alfea. According to the Farah Dowling, graduates of schools they shape the Otherworld rediscovering the long-lost magic, create powerful relics, leads the army and rule the realms.

Changes from the original series 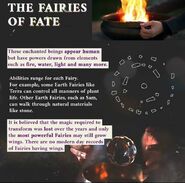 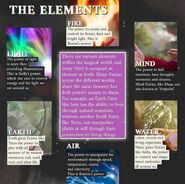