View source
watch 01:33
Wiki Targeted (Entertainment)
Do you like this video?
Play Sound

Past meets present as Bloom explores a pivotal memory. Meanwhile, Aisha struggles with her studies, Silva shares a secret and a school party takes shape.

Bloom’s eyes are still rolled back, and they are completely white. She begins to remember being born, and a woman says to her, “When the time comes, find me”. Her eyes then revert to normal, and she tells Aisha that she believes she’s had a vision of the fairy who took her from the Otherworld.

Bloom believes the memory was embedded in her head by this woman, but Aisha tells the red-headed fairy not to get her hopes up in finding this fairy. Despite nearly being killed Silva returns to train the fairies and Specialists to fight. He’s noticeably hobbling, and Riven asks Sky if Saul looks okay to him. Stella believes that Saul looks fine and tells Sky to stop worrying. When Stella walks away, Riven is confused as to why Sky has let Stella back into his life.

Elsewhere at Alfea, Dowling continues to show the first years how to control their powers. In class, Bloom is asked if she can light a single kindle and leave the others untouched. Bloom pulls it off, and it seems like she is improving with her powers. Unfortunately, Aisha gets her latest power control wrong in class which shocks Bloom.

Sky checks up on Silva and realizes that he isn’t coping well with the medication. Silva gives him an update on the mission; they are close to killing the Burned One. However, they need to kill it soon as the infection is growing inside Silva, and if it reaches his heart, he will die. Sky is understandably emotional since he sees Silva like a father.

Before a Senior Party, Terra is freaking out and asks Bloom and Aisha to help with her make-up. She wants to look cool and fun. Meanwhile, Sky tells Stella that he isn’t drinking — he’s too busy thinking about Silva.

There is a progress update by Marco, the fairy tracking down the Burned One with his squad. Silva and Dowling radio to Marco and his battalion for an update on the Burned One. Silva looks pale and near-death. Dowling is impatient, knowing she’s putting mission success down to their graduates.

At the party, Terra brings weed brownies to the party as a way of impressing Dane. He takes one and then looks for his friends. Bloom speaks to Sky about Silva and actually listens to him. Sky opens up and explains how Silva raised him. After revealing his feelings for Silva, he asks Bloom to play beer pong with him. He finally loosens up and drinks. Aisha uses her magic at beer pong and instead of winning, ends up soaking Riven in the process, to which Bloom finds it hilarious. Aisha, on the other hand, is not happy, as it’s yet another example of her being unable to properly control her powers.

After the beer pong, Riven has a loose tongue and brings up to Bloom what happened to Stella’s last roommate Ricki. Ricki was Stella’s best mate until she started flirting with Sky. Stella apparently blinded Ricki on purpose. Bloom looks to Sky to see if it’s true, and Sky’s face says it all. Bloom is a little spooked by the story and tries to find Aisha, but she ends up in a side room and looks at a photo frame and is shocked at what she finds.

Musa tells Sam that they need to sneak around because he is Terra’s brother. Which puts her in a tough spot. When they kiss, Sam quickly disappears, and Terra shows up. Terra asks about Dane and wonders if it could be a “thing”. Musa tells Terra that when they are together, he seems comfortable so it could mean something. Meanwhile, Riven tells Dane that Terra wants him, but then changes the conversation and asks about his shirt size.

Sky talks to Stella about her purposefully blinding her best friend. He’s drunk, and they argue about the truth to the story. Suddenly, Sky gets a text; that the Burned One is dead.

Bloom takes photos of the frames and asks Beatrix if she knows the person in the photo. She then goes outside and tells Aisha that the woman in the photo is from her vision. She wants to see Dowling in the middle of the night. Aisha is frustrated and tells Bloom she’s leaving the party. Meanwhile, Beatrix tells Dowling’s assistant Callum that they need to go underground immediately because Bloom is asking about Rosalind. She uses her magic to throw Calum into the trap on the door and heads down herself, leaving Calum injured.

Silva tells Sky that he’s still sick; the battalion must have killed another Burned One, which means there is more than one. Sky is annoyed that Silva is giving up. Meanwhile, Dowling is worried that there’s more than one Burned One. Bloom approaches Dowling and shows the photo of the woman from the frames. Dowling confirms that the woman in question is named Rosalind.

Dowling goes on to tell Bloom that she was Rosalind’s student, and then her protégé, but that she doesn’t know the circumstances of Bloom’s birth. Dowling continues defending Rosalind, claiming she was headmistress during a difficult period of Alfea. Bloom demands to see her, but Dowling tells her that isn’t possible because Rosalind is dead and “this is where it ends”.

An enraged Bloom heads to the stones as she cannot accept what Dowling said as an answer and drunkenly heads out to the stones and sets them alight with her fire. She’s filled with rage, but then it turns into tears, and the fire stops as she sobs uncontrollably. Sky finds her and Bloom tells him that she’s a Changeling. However, she quickly notices that Sky is wearing armor and it appears that he’s going after the Burned One on his own.

Once again, Bloom hears some mystic whispers that led her to the Burned One. She knows where it is, and Sky immediately sprints. Bloom chases after him.

Back at the party, Stella asks Riven where Sky is, and he hints that he’s with Bloom. She gets a text from Bloom about a Burned One being near the stone circle and how it’s an emergency. Musa gets the same message. Meanwhile, Beatrix finds a barrier underground, and when she touches it, it shocks her.

The Burned One attacks Bloom and Sky. But not long after the others arrive, Stella shocks the creature with her light; as the others also use their own powers. Eventually, Sky stabs it. They initially think they have killed creatures, but Dowling arrives and finishes it off.

As for Beatrix, she updates Calum and tells him that Dowling has put up another barrier. She uses her powers to disintegrate Calum into millions of pieces.

Sky reunites with Silva, who has recovered from the infection, and the two men hug. Dowling has to pretend that she’s annoyed at Bloom and the others but deep down, she’s happy that they saved Silva’s life. Stella apologizes to Sky for being awful to him and says she doesn’t like feeling vulnerable. Sky backs off, but Stella tells him he’s the only person that knows the real her and that she’s the heir of Solaria. She asks him to be her safety net, but Sky in turn asks her who his safety net would be.

Late that night, Terra gets into bed, as she browses through social media and sees Riven asking Dane about his “weird-arse fat girl”. Dane starts ripping into Terra as Beatrix records the video. Terra subsequently sobs.

Bloom tells Aisha about her night, but Aisha tells her to stop. Aisha proceeds to state how there may not be a conspiracy, and how Bloom could have been the daughter of a scared student who got pregnant and didn’t know what to do. She then brings up the fact that many fairies would kill to have magic like Bloom and that she should start being realistic. Bloom gets upset and says being realistic means her mother didn’t want her. She wants to believe there’s something more.

Elsewhere, Dowling tells Silva and the others that Bloom knows about Rosalind but that the two women can never meet. Dowling brings up how Bloom appears to be the most powerful fairy ever to live.

Under the school and behind the barrier that Beatrix was trying to break into is Rosalind with her eyes closed and in stasis. 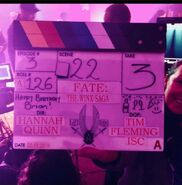