View source
watch 02:56
Doctor Strange in The Multiverse o Madness - The Loop
Do you like this video?
Play Sound
Our community needs more information on this page! Can you help out? Click here to add more.

Josh Cowdery
Mike Peters is a recurring character from Fate: The Winx Saga. He is portrayed by Josh Cowdery.

He is a human in his 40s and Bloom's father. He is married to Vanessa Peters.

He and his wife Vanessa had a child in 2004, a little girl born with a heart defect. Three days later, the defect had miraculously healed. Unbeknownst to them, their human daughter had been switched with a fairy child, a practice referred to as Changeling. They raised this child, Bloom, as their own for the following years.

Their relationship with Bloom was fraught until an explosive argument that resulted in him taking down Bloom's bedroom door, robbing her of privacy, because she was an introvert and wouldn't open up to her mother. In the middle of the following night, Bloom accidentally used her fire fairy powers to set fire to the house and attack her mother. Mike seemed physically sound, though Vanessa suffered third-degree burns.

After the fire, Bloom was seemingly accepted to a private school in Switzerland and left Gardenia.

In To the Waters and the Wild, Mike and his wife call Bloom as she's getting settled in Alfea. They believe she's in Switzerland and the call ends when she has to pretend that it's late and she's going to bed.

Later on, they are called by Bloom in the evening. She asks them if she's made a mistake and they reassure her. Throughout the following episodes, it is revealed they call her every day when they believe the morning is in Switzerland.

In A Fanatic Heart, they call Bloom, but Aisha answers, telling them her exams are hard. A couple of days later, Bloom shows up at the door with her friends. She tell them all about her origin and that she's a fairy. They seem very supportive of her and her friendships.

Mike is a tall white man, with brown hair and brown eyes. He's in his 40s.

Vanessa is Mike's wife. He seems to love her. He agrees to her take down Bloom's door for her.

Bloom and him seem to have a good relationship, though him going with Vanessa and taking down her door might have eroded their previous trust.

Mike Peters is an adaptation of Mike

. Unlike his counterpart he's not an Firefighter. He looks and acts differently as well. Though the original Mike Peters was a little obtuse when it came to believing Vanessa and Bloom about magic, he would probably not have taken away Bloom's privacy. 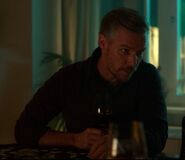