View source
watch 02:07
Spider-Man: No Way Home Trailer Dropped - The Loop
Do you like this video?
Play Sound

Jacob Dudman
Sam Harvey is one of the main characters of Fate: The Winx Saga. He is portrayed by Jacob Dudman.

Since his father was a professor at Alfea, he and his sister Terra grew up around the school.

Our community needs more information on this page! Can you help out? Click here to add more.

Sam is a sweet and kind person. When he is late to his class, he uses intangibility.

Sam has short brown hair and brown eyes. He is 1.8 meters (5'9") tall. Sam dresses in a very casual style, usually a t-shirt, jeans and jacket of some sort.

His sister and also a fellow earth fairy. Terra has a love for plants and fairy history which Sam tends to find quite boring. However, its evident he loves and cares for her deeply when he and his father both stand to protect Terra when Dane comes to apologize to her 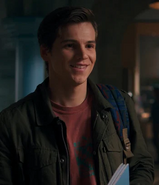