Callum is confirmed to be dead and this prompts Ben, Silva and Dowling to investigate it. There are suspicions that someone tried to get into Dowling’s secret underground. Which leads the trio to conclude that there’s a murderer inside the school. Meanwhile, Beatrix is obsessively looking at Bloom’s Instagram now that she learnt that the fire fairy is a changeling..

After learning the supposed truth about Rosalind, Bloom is putting on a brave face, but her suitemates know she’s struggling with the recent information. Musa confirms as much by using her empathic abilities as a mind fairy. In addition, word has also gotten out that she’s a changeling.

Meanwhile, Dane tries to speak to Terra about the social media video where he made fun of her. He apologises to her and calls her a great person. Terra tells Dane that he needs to be careful who she trusts and shuts the door on him afterwards.

Stella is anxious because her mother, Luna, the Queen of Solaria, is coming to Alfea. Sky assures Stella that she can handle her mother. Luna gives a speech at the school assembly. While she does, Dowling tries to find more traces to learn who murdered Callum. Musa senses Dowling’s anxiety. Suddenly, Luna announces they face the threat of at least five Burned Ones, and it’s time to pay attention. Her speech escalates quickly. Where Dowling decided to keep things relatively under wraps, the Queen has other ideas.

Aisha finds a mystic recording device and learns that Callum is dead while trying to find the school records to help out Bloom. She tells Bloom, and this in turn leads the fire fairy to ditch the school assembly in order to look deeper for records that delve into Rosalind instead. Sky finds Bloom snooping around the school and decides to help her out to find archives. Beatrix and Riven find them as well and start teasing them both, claiming they are having an emotional affair. They keep looking as a group, and Beatrix states that she’s trying to help. She also throws Riven under the bus and tells the other two that he is the one responsible for everyone knowing that Bloom is a changeling.

This leads to the group splitting up. Sky approaches Riven outside, and they argue, leaving Bloom and Beatrix alone. In the end this is what Beatrix wanted. Beatrix asks Bloom about Rosalind, and they find a door that says “restricted area”. Beatrix successfully picks the lock, and the two girls find that inside is a war room.

Luna speaks to Dowling about Stella and asks how the process of fixing her. Daughter is going. Dowling insists that when Stella is ready, they will move to stronger magic Her mother continues to speak harsh words and proceeds to belittle Stella. Luna then shows off her power to make her daughter feel weak and insignificant. When Stella leaves the room, Aisha asks if she is okay since unbeknownst to any of the three women, she was listening to the conversation.

Elsewhere, Bloom’s friends believe Dowling was trying to find the killer in the assembly. Suddenly, Sky joins the conversation and asks the girls if they know where Bloom is.Bloom’s friends believe Beatrix is a threat and send Bloom messages in the group chat. Beatrix uses her powers to fry Bloom’s phone. Stella is hurt that Sky is looking for Bloom when she’s having such a terrible day. Sky tells her that Bloom is missing and that he’s ultimately done with her because everyone knows Bloom is a changeling due to Stella spreading that sensitive information around the whole school.

Beatrix takes Bloom to a place called Aster Dell; this is the town marked on the war room map. Suddenly, Beatrix laps up her powers and brings down a barrier to reveal Aster Dell. She explains how this was a wonderful settlement until the Burned Ones arrived. A military unit from Alfea decided that destroying the creatures was more important than the lives of the people. As a result, the town is now wretched and in ruins. Beatrix explains that Luna put a veil over the town to hide the war crimes committed here. She reveals that she was born in this town and her family died here two days before Bloom’s First World birthday. Bloom concludes that her birth parents likely also died here. Beatrix then confides in the fire fairy, and mentions how she thinks they are the only survivors.

Beatrix claims she saw the military conquering the town and the memory was burned into her mind by Rosalind. She then says that Dowling, Silva and Ben were there. The pair then drive back. Bloom says she needs more answers, but Beatrix tells her that Rosalind is still alive and underground at the school behind a barrier. Suddenly, their car is attacked, and Dowling arrests Beatrix with special bracelets.

Later, Bloom tells Sky and others that Beatrix did not kidnap her. She’s understandably confused. Sky confronts Silva and tells him he wants the truth. Silva tells him to gain Bloom’s trust and find out what Bloom knows from her impromptu field trip with Beatrix.

Meanwhile, Terra is upset because her father lied to her earlier about the recent events; this guilt-trips Musa, who reveals that she is in a relationship with Sam, Terra’s brother. Terra laughs and hugs her. She then claims her father lost his hair early and that so will her brother. Suddenly, the group of friends realise that Stella is leaving. Luna is taking her home.

Bloom tells Dowling that how she’s treating Beatrix is barbaric by limiting her magic with bracelets that visibly cause her pain. She tells the headmistress that it was only a joyride, and that was all. But Dowling doesn’t believe her and when Bloom walks off, she rings Bloom’s mother and raises “concerns” about Bloom’s behavior as of late. She tells her that if Bloom mentions anything out of the ordinary, to let her know immediately in order to help Bloom. 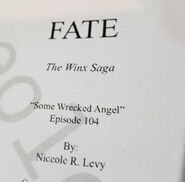